What is it about Victorian Britain that we find so evocative? Why are so many aspects of the British identity and British daily life – from art to architecture – still tied up with that era of time? To be sure, it was a time when the nation was highly significant on the world scene, but military power and cultural expansionism have both their positive and negative connotations, and it would be hard to make a case for the simplistic attitude that ‘life was better because everyone had to listen to what we had to say'.
So, in what area could Victorian Britain be unequivocally, unabashedly be hailed as a world leader? London had been a major centre of the world scientific community for some time, and as a result, disciplines such as modern engineering quickly found a home in a society which had been educated to believe that it was destined to conquer the world. It was the British destiny, and science was the vehicle which would take us there.
In the centuries since these optimistic early times, many have had to re-examine their attitudes, but what cannot be disputed is that this land was, for several decades, the leading hotbed of engineering talent in the world. The invention of the first modern steam engine, the steam locomotive, the national rail network – the startling innovations followed one another in quick succession. If nothing else, this was the age of steam, and that, at least, we can be proud of.
Almost since their have been railways, there have been model trains, with small-scale engineers striving to reproduce these magnificent machines in miniature. And, true to our engineering background, an industry has sprung up to enable enthusiasts to relive the glory days. For a railway modeller in search of model steam train parts Walsall Model Industries is a company offering a treasure trove of delights. Beginning with a range of cast model locomotive wheels half a century ago, the business has diversified and adapted to become a distinguished supplier of high quality components and kits. If you're into model steam train parts Walsall Model Industries is a name you need to know.
The steam age has inspired art and fashion, most recently in the form of the Steampunk movement. It would almost be easy to imagine the model steam train parts Walsall Model Industries produce being used as part of the fanciful costumes and sculptures such artists have authored. But make no mistake, there's nothing fanciful about the model steam train parts Walsall Model Industries offer as part of their inventory. These are highly detailed, high quality reproductions of the actual components which made steam locomotives of the age so effective at the time. When you build with our fine components, you are following a well trodden trail blazed by master engineers many years ago, in the workshops and draughtsman’s offices up and down the country.
To learn more about the model steam train parts Walsall Model Industries make, contact our team. 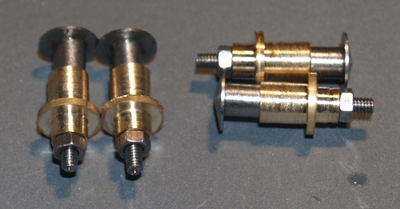